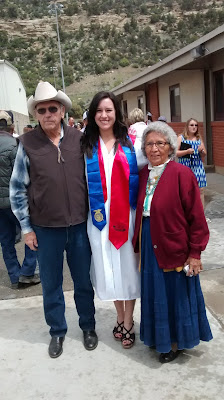 Joleen on graduation day with my Dad and Mom.

It has been a very busy two months. I got a tons of yard work done ( will have more on that later), getting ready for Joleens graduation party. Then on the day of the party it rained and rained some more so we ended up moving the party to the Fire station. We were able to have the after party at the house so I was able to use the yard a little, that I had worked so hard on. We had a taco bar for the party, We had beef tacos, chicken tacos, and elk Mexican steak, with all the fixens, refried beans, salsa, queso,  chips,  two of my sister in laws  made some chicken enchiladas and some cupcakes with graduation hats made from peanut butter cups and Hersey bars. We had a lot of food and a lot leftover but I was able to freeze most of it and dehydrate the lettuce.

Haven't done much canning this past couple months, I did get 21 quarts of meat canned the other day.

Was able to go to the mountains a couple weekends ago for the afternoon my Dad and one of my brothers  and his wife were camping up there so two of my other brothers and their family's and I were able to go up for dinner. It was kind of nice to get up where it was a little cooler we even needed to build a fire when the sun started going down.

We got our garden in finally, all the rain we got rally messed everyone up as far as planting. We just have the one  garden at the house this year since we don't have the lease on the other place.

Got our hunting tags in and Andy, Katie and I all drew our Elk tags. Hopefully we will be able to fill them.

I also got a wheat grinder after a whole lot of research I picked the Nutrigrain mill. I am very happy with it so far. Is so nice to be able to put the wheat in and have it in just a few minutes as opposed to grinding it by hand haha.

My goals for the week
Get some more meat canned.
I have been redoing my drip system on my plants hoping to get finished or at least all most finished this week.
Get caught up on the blog.
Work on my herbal class, haven't been doing a whole with it lately.
I bought an old camp trailer a couple years ago so I am hoping to get it moved up here to the house and get started on that project ( I know just what I need another project haha).
I have a few ideas I want to do in back yard play area for the kids so hoping to get started on that.
I have been working on a household notebook sdo want to work some more on that.
So hopefully I can get some of this done this week.

Menu for this week

Will have what ever kind of fruit I have, and crackers with the soup.
For Andy's lunch he will have leftovers from the night before.

Will have a veggie of some sort and bread with each meal.
Saturday or Sunday we will have leftovers.

Hope everyone has a great week.


Posted by frugallivingonthewatkinsranch.blogspot.com No comments:


Oh my goodness, I can't believe it has been over two months since I posted anything. At the first of the year I made it a goal to try and post at least 4 times a week, failed that epically, I will try to get back on track now. But in my defense I have been super busy trying to get ready for Joleens graduation in addition to all the other things that are going on this time of the year. I got 3 years worth of yard work done in two months, but my yard is looking so good. I will have more on that later. We got our garden in a little late due to all the rain. We finished A.I.ing cows yesterday so that is out of the way for another year. Started cutting hay last week we are way behind on that because of the rain. Haven't even had time to work on my herbal course, I have got to get on that though.
So anyway I am hoping to start getting caught up on things and caught up on my post. I have so much to share.
So hopefully I will have be posting regularly again in a few days.
And thank you to all who was concerned about where I have been.

Frugal Living on the Watkins Ranch

Promote Your Page Too

A little about me

If you need to contact me you can e-mail me at watkinsranches@yahoo.com

I love hearing from everyone and I will
try to reply as soon as I can. Although it may take a couple days to do it.

What will it take to pay-off my credit card?

Frugal Living On The Watkins Ranch

Here is a list of some of the great sites that I link-up some of my posts. They are all great blogs