20 cans of soup/ Seeds
20 cans of soup, get what your family will eat, Wal-mat has soups ranging from 1.00 to 1.68. Or can your own.
Seeds, If you haven't started getting your seeds yet you might want to stat getting them. As you get your seeds go ahead and get some started for your garden. Don't forget your herb seeds.
Do you have your garden all planned out?
Add a little more to your money to your money stash.
Put back a little more water.
Have a great week
﻿
﻿

Posted by frugallivingonthewatkinsranch.blogspot.com No comments:

My Dad and Stepmom's 40th wedding anniversary was the 20th, so all us kids decided to throw them a party. Out of the 10 kids 6 were able to come, My sister from Houston was even able to make it.﻿ 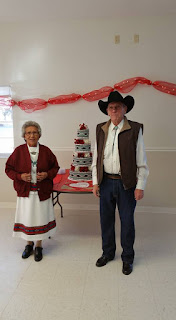 We rented the community center , this place is great has a large kitchen and a playroom for the kids, a playground outside, tons of tables and chairs, a sound system, everyone in the community uses it for all sorts of events. 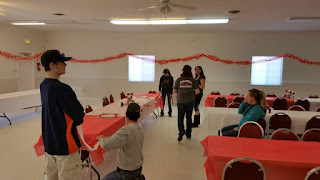 We are setting up, getting the tables ready. 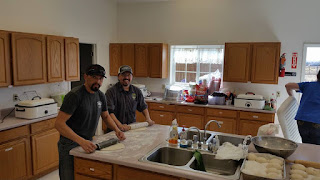 A couple of my brothers rolling out dough for fry bread. Love this kitchen it is large enough to do all the cooking here.
We had smoked brisket and pork, baked potato's, salad, rolls, fried bread, steamed corn stew, it was all so good 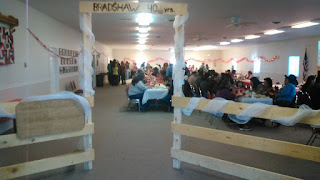 My brothers built this arch to put at the entry way, we were going to put a few bales of hay around it but decided it looked good enough with out them (plus a whole lot less messy).﻿ 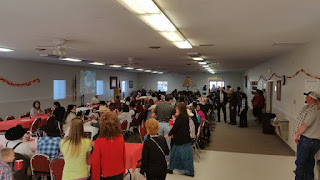 People are starting to trickle in. We had 160 that rsv'ed so I figure we had right around that amount of people. A real good turnout. 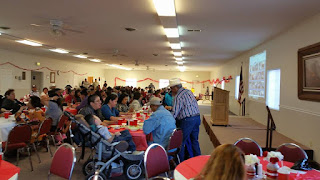 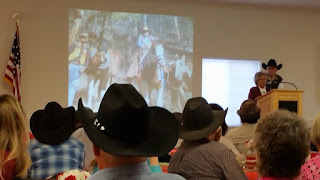 We had a slide show going the whole time with pictures from the last 40 years. Dad and Mom got up and thanked every one for coming and told small stories about all us kids. 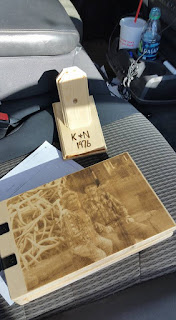 This is the guest book and pen holder. We took some wood to refection's in metal and had them etch this picture into the wood for the cover of the book. 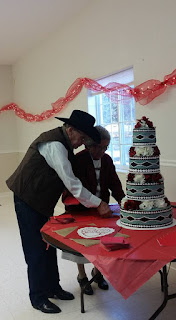 This is the cake we got  . I have to admit out of everything  this was a little bit of a disappointment, was not what we really thought we were going to get and it didn't taste very good at all. It was nice but for the money that we paid for it I really felt it could of been better. A lesson learned here always see the work in person, and ask for a sample of the cake. 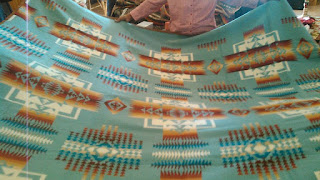 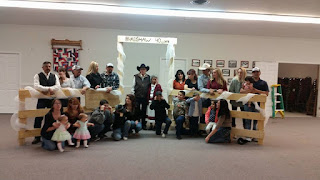 After we got all cleaned up afterwards, we moved the arch and took some family pictures. here are a few of the kids and a few of the grandkids and a couple great grandkids.
It took a lot of work and we have been planning since last November, it was so worth all the work as it turned out really nice.

Email ThisBlogThis!Share to TwitterShare to FacebookShare to Pinterest
Labels: Miscellaneous

I am so excited, Katie ( my youngest daughter) is going to start working part time for me. She has been working at a home health place and has put over ten thousand miles on her car in the last 5 months, and the pay isn't that great for the hours she is having to put in, so she is going to work there part part time like 6 hours a week. She has a job lined up for the end of June so until then she is going to work for me. Also she will be able to do a few more senior things that she has been missing out on because of work.

She gets out of school at noon and will be here to help with the afternoon. Hoping I will be able to get some extra things done. Like catch up on the blog, get some sewing done, and do some of the extra things with the day care I have been wanting to do.
With summer coming this is going to be such a huge help.

So I think it is going to be a win win for the both of us.
Posted by frugallivingonthewatkinsranch.blogspot.com 2 comments:

Email ThisBlogThis!Share to TwitterShare to FacebookShare to Pinterest
Labels: Miscellaneous

5 LBS Baking soda / 1st Aid items
Baking soda, Wal-Mart has 64 oz. baking soda for 1.98. I get my baking soda at IFA our local feed store for 12.99 for 50 LBS, It is just called sodium bicarbonate I use it for every thing from cooking to cleaning and making my washing soda with it.
1st aid items start with the basics Here is a list of things to start with,  and here is a list of natural things you can store and use in place of store bought. I have store bought put back but try to use natural when ever I can.
As you plan your garden set apart a space for a herb garden to use for medicines and to cook with. Also look around where you live and find what grows naturally in your area.
As you are getting you seeds and plants try to find heirloom, this way you can save seeds for next year and will always have a supply of seeds.
Add some more water.
Put a little more into your money stash.
Have a great week.
﻿

Posted by frugallivingonthewatkinsranch.blogspot.com No comments:

5 Pounds Shortening, oils, or lard / Canned meat.
Shortening, lard, or oils. Shortening will last longer then oils if kept in a cool place. I keep lard and just rotate it, same as shortening if keep in a cool, place it will keep longer. I also have some tallow and lard canned which helps to keep it longer. Wal-Mart  has 8 LBS lard for 9.78, 2 LBS 10 OZ shortening for 3.98, and 1 gallon Vegetable oil for 5.96, Get what you use so you will be able to rotate.
Canned meat, You can can your own or buy store bought. If you can catch a good sale on chicken, ground beef, stew meat or roast can your own it is super easy to can meat. If you don't can, then just buy store bought tuna, chicken, spam, corned beef, or even freeze dried. If you watch for sales you can pick up tuna for 50 cents. Wal-Mart has tuna for 78 cents a can and 12 oz spam for 2.64, I forgot to check the price of canned chicken but I don't think it is to bad.
How is the garden planning coming along? Are you expanding or trying to grow some new things this year?
Have you made a order for your seeds yet, or got your seeds found and maybe even getting them started.
Add to your water.
Put a little more into your money stash.
Have a great week.
﻿

25 pounds of sugar at Wal-mart is 13.24. Sugar is the cheapest sweetener to store and it does last a very long time. It may clump up but it is still good. If you store it in 5 gallon buckets it wont clump as bad, I have some stored in buckets and some stored in the bags it came in, it does clump up a lot more in the bags. I've not stored any in Mylar but I am assuming it wont clump up in the Mylar bags.( If you have stored it in Mylar please share about how well it stores).

Honey is a little more expensive,5 pounds of honey at Wal-Mart is 19.98. Honey stores forever it may sugar a little, if it does this just warm up to liquefy it back to where it was. If you can afford it it is great to have, but if not sugar also works. They also make a honey powder it is 10.76 for 3 pounds at Wal-Mart. I have looked at the ingredients and it is mostly sugar with flavoring ( no honey in it). I have some and it dose taste like honey though so if you want the honey flavor with out the huge expense you have a choice.

Detergents You can store detergents or you an store things to  Make your own. I didn't price the different detergents since there are so many different ones and the prices vary ( all expensive). If you plan to make your own you will need to store Borax, Washing Soda ( if you have baking soda you an Make your own washing soda for a fraction of the price of store bought ), Fels Napta or Zote, ( unless you make your own soap then you need lye, hope to do a post soon on making your own lye).


The Action Item for this month is to get your garden planned, even if you only have a small area you can plant a lot ( there is all kinds of information on the web for small area gardening). If you have  already had a garden try to expand and add a few more things maybe even some things you haven't tried to grow before. You might want to look into berry bushes and fruit trees also. if you have landscaping in your yard you might want to think about replacing some things with edibles (If you have to water might as well water something that gives something back).

The extra item for this month will be garden seeds, bushes, trees and herbs. After you get your garden planned try to start ordering the seeds and things you need for it.

Continue to put back water, either fill your own or buy store bought.

Keep adding some to your money stash. Add what you can, try to set a weekly goal even if it is only a few dollars every little bit will help and will be more then you had.

Have a great week.
Posted by frugallivingonthewatkinsranch.blogspot.com 4 comments:

Frugal Living on the Watkins Ranch

Promote Your Page Too

A little about me

If you need to contact me you can e-mail me at watkinsranches@yahoo.com

I love hearing from everyone and I will
try to reply as soon as I can. Although it may take a couple days to do it.

What will it take to pay-off my credit card?

Frugal Living On The Watkins Ranch

Here is a list of some of the great sites that I link-up some of my posts. They are all great blogs